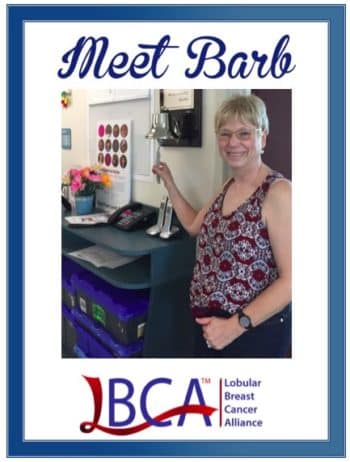 Many women with lobular breast cancer who have found their way to the Lobular Breast Cancer Alliance (LBCA) after they were diagnosed want to help build a community among peers, to share the most current information about ILC detection, treatment and clinical trials, and to raise awareness about this common yet understudied and sneaky breast cancer that needs more research. Sharing their ILC story is just one of those ways.

to become a patient advocate.

My lobular breast cancer story started with a routine mammogram in November 2016. There is no cancer in my family, and I had no symptoms, so I didn’t give it much thought. When the results warranted a second look, that also did not seem to be much of a concern. After an ultrasound and a biopsy, I learned I had invasive lobular cancer. I started to look online for information about lobular cancer and was shocked to find little existed.

When it came time to decide what kind of surgery to have, I opted to go for a bilateral mastectomy.  The surgery lasted 12 hours, in part because they had to wait for repeated pathology results. I had lymph node involvement. As I was wheeled into a hospital room that night, the doctors expressed surprise that the tumors were twice as big as expected and that I had five positive lymph nodes of 10 taken. I had been prepared for them to say it wasn’t stage 1, but not stage 3. I now know that this happens a lot with lobular breast cancer. After surgery, I had chemo, radiation, and then two revision surgeries of my breast reconstruction.

One day I saw a website for the Lobular Breast Cancer Alliance. A group had recently formed with several advocates on the West Coast and others scattered across the country to help get the word out about ILC. I joined them. My first step into advocacy involved going to Project Lead in July 2018, where I received an intensive education about breast cancer. I attended the San Antonio Breast Cancer Symposium where I was able to meet in person with some of the lobular group. I also applied to be a consumer grant reviewer for the federal government’s Breast Cancer Research Program. I also agreed to join other advocates with ILC to help the LBCA form and grow. I am still finding my way as an advocate, but I am confident a path will present itself.

Would you like to tell others your ILC story? Send an email to communications@lobularbreastcancer.org to request more information about how to submit it.