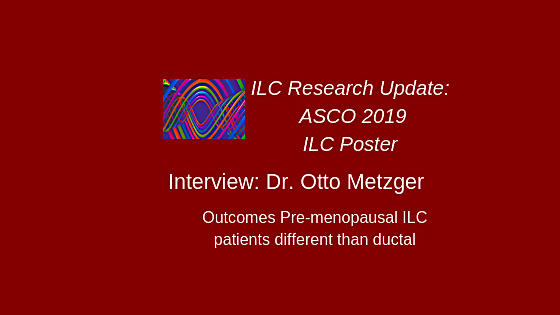 Posted at 23:57h in Educational Resources by Leigh 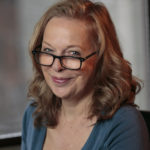 The 2019 annual meeting of the American Society of Clinical Oncology (ASCO) had a number of lobular breast cancer researchers. Dr. Otto Metzger, a breast cancer oncologist and clinical investigator with Boston’s Breast Oncology Center at Dana-Farber/ Brigham and Women’s Cancer Center and member of the Lobular Breast Cancer Alliance Scientific Advisory Board, presented a poster with colleagues with results from a new lobular study that, again, highlighted distinct differences between outcomes premenopausal women diagnosed with either lobular or ductal histology.  Below, a brief interview with Dr. Metzger on what this study means and, more important, next steps.

I’m here with Dr. Otto Metzger of Dana-Farber talking about the results of a new study on lobular breast cancer. Can you tell the LBCA readers what this study is about? 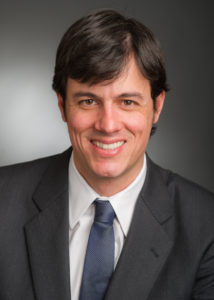 In this abstract we’re presenting the results from a SEER retrospective analysis (SEER is the NCI’s Surveillance, Epidemiology and End Results cancer registry), looking at outcomes for women that were diagnosed with lobular carcinoma in the premenopausal setting. We know that lobular carcinoma in a premenopausal setting is not as common. ILC is more commonly diagnosed in woman who are postmenopausal. So here, the advantage of using a population-based database is that we have enough numbers to look at outcomes and compare the outcomes of premenopausal women that have either lobular or ductal carcinoma.

Our series includes over 11,000 women with invasive lobular carcinoma. When we compared the outcomes with invasive ductal carcinoma, we saw they have a different pattern of disease relapse. In the initial years after the diagnosis, premenopausal women with lobular have a better outcome in terms of breast cancer specific survival. But as time goes on, we see that the curves flip and the relapse rate for patients with lobular in a premenopausal setting tends to be higher over time.

This basically tells us that lobular, again, is a different disease. It’s associated with a pattern of late recurrence. This data doesn’t tell us what the causes are but do generate hypotheses: Premenopausal women diagnosed with lobular carcinoma might need more effective and/or longer duration of endocrine therapy, but this remains speculative at this point.

We have seen data in the post-menopausal setting showing that Tamoxifen is not an ideal drug for patients with lobular and this could have influenced some of the results we’re seeing here. But I don’t think it’s explaining it all. I think this is telling us the disease biology is different and we really need to look at lobular as a separate disease.

That’s fascinating. And also, a little bit terrifying to know that the longer you go, the higher the odds are that it will recur as stage 4. Is that what you’re saying?

That’s correct. There is a pattern of late recurrence, but we also should bear in mind that the recurrence rates are not very high. We’re talking about a population-based analysis, so when we look at the curves it can be very scary, but we are talking about low rates of recurrence in a given year. This is different than looking at risks at individual patients.  Here, with a population-based series what we’re trying to do with aggregated data is inform the scientific community about the natural history of ILC.

So, what I hear you saying is, ‘Don’t be freaked out. Be confident that researchers are working on it and are trying to get more awareness for ILC as a distinct disease and have better, smarter, more nuanced treatment for ILC patients.’ And moving forward, maybe instead of going on Tamoxifen, these patients may go directly to some kind of hormone suppression and then AI?

That’s a possibility, which could be considered on a patient by patient evaluation. Our data is not supporting different treatments for patients diagnosed with lobular carcinoma. 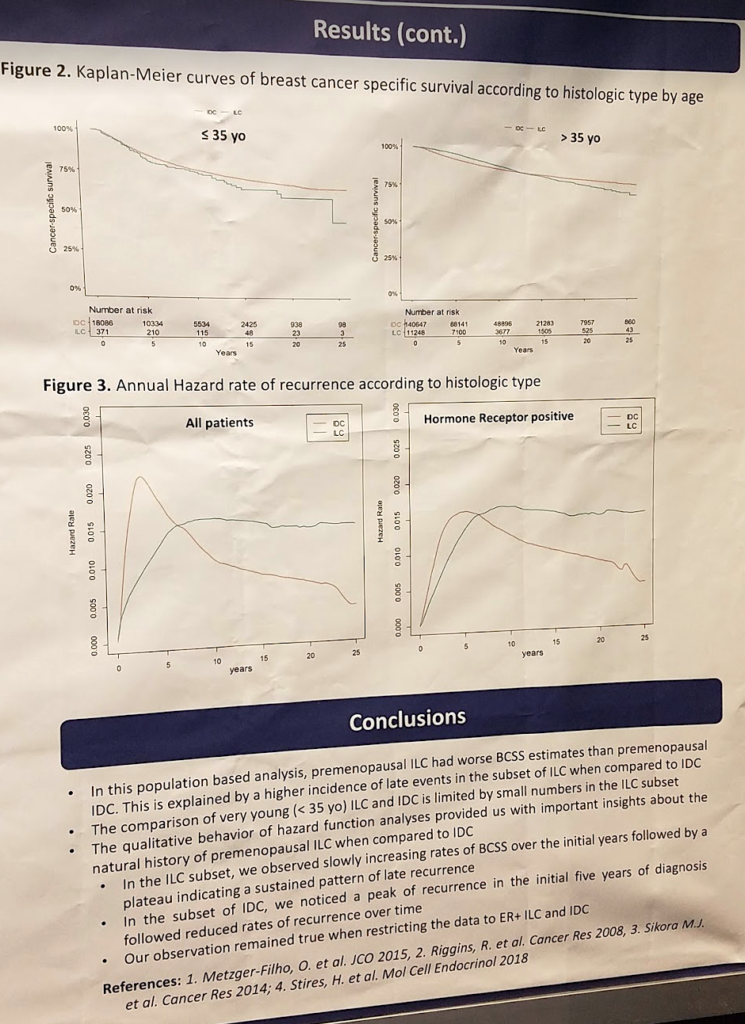 We don’t know exactly because with SEER we don’t have this level of granularity of the data in terms of what treatments were given. With 11,000 women, we would expect the majority were treated with Tamoxifen which is still the standard of care treatment for premenopausal patients. But we basically don’t have this information.

I know that on some of the lobular Facebook groups, women are concerned when they hear Tamoxifen may not be as effective. They’ll say, ‘Should I even bother?’ So, should they even bother taking Tamoxifen if they’re premenopausal and it’s recommended by their oncologists?

Tamoxifen remains the treatment of choice for pre-menopausal women. Our data doesn’t say that it doesn’t work. It says that this drug might not be the best drug possible and that we might need additional intervention of successive women with lobular. The tamoxifen versus aromatase inhibitor question is being evaluated in a clinical trial at Dana-Farber (PELOPS) where patients diagnosed with lobular carcinoma are treated with endocrine therapy prior to surgery.

It sounds like there’s a very big difference between population analysis and individual recommendations. And that it’s very important for individual patients to remember that they’re not a statistic.

What are your next steps?

We’re hoping to launch a prospective clinical trial just to treat premenopausal women in the U.S. This is a project that’s going to be national and would include patients who have either ductal or lobular carcinoma. We’re going to treat these patients with endocrine therapy plus or minus one of these new class of drug that potentiates, or enhances, the action of endocrine therapies called cycle independent kinase inhibitors or CDK4-6 inhibitors. We’ll follow these patients for long-term outcomes. The goal is that in the near future we’ll have additional data from clinical trials where we’re looking at lobular carcinoma as a distinct subset.

In parallel to that, we’re conducting at the moment a smaller trial at Dana-Farber in Boston. This is a project called PELOPS, where we’re enrolling patients with either lobular or ductal carcinoma and they are treated with pre-op endocrine therapy. We’ll have some data and translational research results coming off of this project to try to understand the differences in the efficacy of endocrine therapy for lobular carcinoma.

You’re doing a lot of wonderful work in this space. Thank you so much, Dr. Metzger, from all of us with the Lobular Breast Cancer Alliance.